so we can ride them!

Special Thanks to Anacapa Brewery! Bring your mug & money!
Pimp Your Ride! We ride every First Friday* Ride at own risk

Posted: July 28, 2010 | Author: Gwendolyn Alley aka Art Predator | Filed under: how to | Tags: how to develop a bicycle culture | Leave a comment

This Wednesday’s meeting of the Ventura Bicycle Union includes updates on the Power Breakfast, a City-Hall appearance, and the first review of Ventura’s 2010 Master Bikeway Plan and a response to it.

Plus going away part for both Winston and Helen.

Hope to see you there!

How To Create a Bike Culture: Santa Barbara’s CycloMAYnia Video

The bike culture in Santa Barbara is growing! This video showcases how, what, and why, and serves as a model for all of us trying to show the world the cycling is a more than just races or commuting or a grind or an ax to grind –but a fun way to connect with your neighbors, your friends and your community.

This looks like such a fun way to spend a summer afternoon! A family friendly bike ride around LA’s Griffith Park followed by some free Shakespeare! And period costumes too! Maybe we can get a ride going in Ojai to see the outdoor performance put on by Theater 150!

Thanks to support from REI, CICLE LA Urban Expeditions offers regular family friendly rides in LA to events. Next up is a Shakespeare Ride Sunday, July 18th, 2010 meeting at 4:00 pm at the Griffith Park Merry-Go-Round parking lot just inside the Los Feliz/Riverside entrance to Griffith Park. And it’s all free, free, free, free! The ride begins at 4:30pm and meanders through Los Feliz to the Shakespeare Bridge to arrive just before 7:00 pm at the … Read More

Posted: July 8, 2010 | Author: Gwendolyn Alley aka Art Predator | Filed under: how to | Tags: how to create bike friendly communities | 1 Comment

See what is being proposed, demonstrate that people care about bicycling in Ventura, and express your thoughts by attending and participating at the meeting.

You’ll be in good company: Mayor Bill Fulton lives in midtown as does City Manager Rick Cole and they just might show at the meeting as might other city council members.

Thinking about Independence Day reminded me of last year’s July First Friday ArtRide–The Fossil Fuel Free Ride. So here’s a quick ride down memory lane with photos by Mark Mathews. The August 2010 theme is the same as the Ventura County Fair’s–“Western Nights & Carnival Lights” and we ride First Friday and the next morning we’ll ride in the fair parade. Join us!

Above is a Muppet version of celebrating Independence Day; and here's the FFArtRiders version: On the "Fossil Fuel Free Ride" July 3, we visited Bell Arts up the Avenue, Sylvia White and V2 in midtown, and Art City back near the Avenue. I was too busy keeping the ride rolling and neglected to get photos; fortunately, Mark was able to shoot while we rode! After the ride, we picked up hot dogs, c … Read More

Looking for a Fourth of July “ride”? If you’re around Ventura, grab a kid and head over to Main Street and push, pull, ride along or stroll Main from Chrisman to the Street Fair.

Tomorrow morning, bright and early, we'll walk up our street to Main in midtown and join the throngs of families for this year's Push'em Pull'em Parade. Park at the San Jon Road City Maintenance yard and join us! Our son has been in this human scale, human propelled parade since he was eight months old so this will be his 7th trip down Main. When I asked him if he wanted to be in it this year, he said "Of course!" Sponsored by the Ventura East Ro … Read More

What a glorious day! Perfect summer weather for a Ventucky Vice ArtRide on my bikergo along the beach and the streets of Ventura!

Here we are, decked out as the Ventucky Vice squad, a group shot on the Ventura Beach Promenade with the Pier in the background. 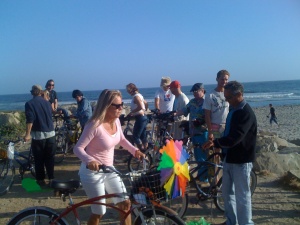 For the July ride, our squad ranged from 20-35, as people came and went along the route.

We started at the Artists Union, as usual, meeting up there at 530pm and rolling along the promenade a little after 6pm.

We stopped at the Ventura River Bike path for a photo opp; do you see the palm tree on the back of my bikergo? It plays two songs and lights on the tree dance in time to the music…

From the Ventura River bike path, we turned onto Main where we dismounted to see the student art exhibit at CSUCI. We cruised up Main past Winchesters and Bernadettes, then rolled back down Main to stop at Love Fox to see Winston’s drawings and to enjoy his light lemony home-made hummous. Just in case you didn’t know, Winston did the logo for the Ventura Bicycle Union. There are several new shops these days in the El Jardin courtyard and we look forward to riding over there another day for a visit!

Next we went south on Ventura Avenue to visit the WAV, then north to Bell Arts Factory where we lost ourselves in fine art of all stripes. Yes, it’s an easy, flat ride with plenty of stops! 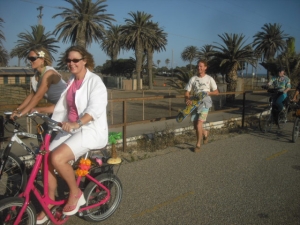 re Art Ciizens had an art show plus a spread of snacks. Thanks to Anacapa for the donation of 8 growlers of beer including a porter, a new golden ale, and a red. The fire and the evening roared on but my feet gave out first and said it was time to ride home.

Thanks to Daniel Bogg and my iPhone for ArtRide photos! More and different ones will be up in a moment over at Art Predator; I’ll add more here as people send them to me!

Originally uploaded by crows to burnaby

Ventura County Fair Parade August 7:
TBA Meet at our designated spot on Main
Ride in the parade and entertain the crowd!

It’s gonna be fun & you should join us! Just wait until you see my hot pink 6″ high wedgie sandles which match my hot pink bikergo! Will post Ventucky Vice ArtRide photos as soon as I can!

Looking to get in on the Ventucky Vice ArtRide tonight? 530pm Meet at the Artists Union Gallery 330 S. California St. 6pm Ride along the promenade and the river trail to Main Stops will include Bell Arts Factory 432 N. Ventura Avenue to see new work by Claudia Pardo McFayden like the beautiful painting pictured and to Love Fox Vintage Clothes on Main in the El Jardin Courtyard to see cyclist Winston Braun’s art and cyclist Benicia’s new shop! Joi … Read More