The San Buenaventura ArtRiders Bicycle & Social Club invites you to celebrate the arrival of summer with a Seersucker Social and SantaCon for the next First Friday ArtRide June 3!

Seersucker is that puckery summery cotton kind of fabric–you know, that often comes in gingham. Patagonia is showing a lot of it this season but you can also find it at thrift stores.

And it’s a SantaCon! Because Santa is always welcome on the ArtRides and we hear he’s going to be on vacation and attending a convention of Santas that weekend at the Crown Plaza.

We usually end up at Art City 197 Dubbers St. around 8:30pm. We might even play some night time croquet.

Here’s the seersucker -3 flyer in progress to download and distribute. Many thanks to Zanna for helping with this!

“Ride of Silence” May 18 Reminds Us All to Respect Cyclists

Posted: May 18, 2011 | Author: Gwendolyn Alley aka Art Predator | Filed under: how to | Tags: bicycle fatalities injuries Ventura, how to join a Ride of Silence, Ride of Silence Ventura | Leave a comment

Tonight is the “Ride of Silence.” If you can’t join a ride or create one, please light a candle for those who have lost their lives while riding their bikes.

During the past year or so in Ventura, we’ve had a number of bicyclists injured and killed by cars. Our local bicycling community has also been touched by hit and run accidents beyond our county–we don’t always ride close to home. A number of people have been victims of hit and run drivers. Just last Wednesday, a young Ventura College student was killed as he and a friend rode bikes to take a final exam; the same driver went into the bicycle lan … Read More

While I love this People for Bikes video myself for many reasons,  many commenters about the video on their facebook page and on YouTube noticed and bemoan the lack of helmets on riders and lack of lights on bikes. While helmets are a choice for those over 18 in California, riding without a light at night is illegal in California and dangerous.

Without head and tail lights and reflectors, drivers and pedestrians don’t see you–and you can’t see obstructions either. That’s why on our ArtRides we remind people over and over to  LIGHT YOUR BIKE!

Speaking of ArtRides, the next one is June 3 “Summer Solstice Seersucker Social & Santacon.” Here’s the seersucker -1 pdf flyer in progress to download. Many thanks to Zanna for helping with this!

Tonight is the Full Moon Ride! Meet at 8pm, Mission Park in downtown at Main and Figueroa; ride leaves soon after and travels as a group to Ventura College 4667  Telegraph Road and loops back.  Some riders will bring extra red taillights; if you want to buy one, bring $4 to the ride.

Posted: May 16, 2011 | Author: Gwendolyn Alley aka Art Predator | Filed under: Copenhagenization, how to | Tags: how to incluence government about bicycling issues | 2 Comments

A month or so ago, Ventura City Council Member Carl Morehouse invited me to serve on an advisory committee to the Ventura County Transportation Commission’s Comprehensive Transportation Plan (CTP) Planning Process. He asked me because he knows I am a long time resident of our community and because I’m a cyclist. I also reminded him that as a teacher at Ventura College, I’m also familiar with the needs of students both on bicycles and on public transportation.

Of course I said yes! Tomorrow is the first meeting that I’ve been asked to attend. Keep reading to learn more about VCTC and the CTP and how you can share in the planning process. END_OF_DOCUMENT_TOKEN_TO_BE_REPLACED

“Ride of Silence” May 18 for Fallen Cyclists

Wednesday, May 18 is the national “Ride of Silence” day to remember fallen cyclists.

THE RIDE OF SILENCE WILL NOT BE QUIET

Cyclists will take to the roads in a silent procession to honor cyclists who have been killed or injured while cycling on public roadways. Although cyclists have a legal right to share the road with motorists, the motoring public often isn’t aware of these rights, and sometimes not aware of the cyclists themselves.

In 2003, Chris Phelan organized the first Ride of Silence in Dallas after endurance cyclist Larry Schwartz was hit by the mirror of a passing bus and was killed. (Read the full history here…)

The Ride of Silence is a free ride that asks its cyclists to ride no faster than 12 mph and remain silent during the ride. There are no sponsors and no registration fees. The ride, which is held during National Bike Month, aims to raise the awareness of motorists, police and city officials that cyclists have a legal right to the public roadways. The ride is also a chance to show respect for those who have been killed or injured.

To get information on how to organize and host a Ride of Silence, please click here; you might also want to look at our FAQ.

Locally Channel Islands Bicycle Club is leading a “Ride of Silence“ from 6:30pm – 8:30pm. Meet at the Von’s shopping center at Harbor and Seaward (2401 Harbor Blvd, Ventura) CA for a 10 mile ride. Find out about other rides you can join at the “Ride of Silence” website: http://www.rideofsilence.org/main.php 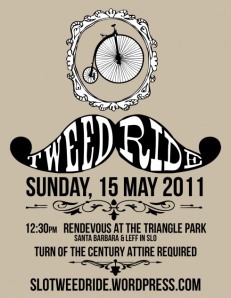 San Luis Obispo gets into the swing of spring with a Tweed Ride this Sunday May 15, 2011. Meet up at 12:30 at Triangle Park, take a rambling roll through town then enjoy leisurely lawn games, contests for best mens and ladies attire, and other festivities.

In case you don’t know,  on a Tweed Ride cyclists are expected to dress in traditional early 20th century attire (tweed, wool, knickers, hats, moustaches, oxfords, etc). Any bicycle is acceptable for the ride, but classic vintage bicycles are highly encouraged and all efforts to make the ride into a time warp are appreciated. Some Tweed Rides even prohibit cyclists in modern attire like lycra and jeans.

If you’re traveling from points south, arrive in grand style with other cyclists by train!

Take the 799 Pacific Surfliner train on Saturday or Sunday at 10:15AM in Santa Barbara, or 9:35 AM in Ventura, arrive in San Luis Obispo at 12:45PM. The spring wildflowers will be spectacular.

Book at least 3 days in advance through www.SantaBarbaraCarFree.org to receive a 20% discount on your Surfliner fare! You must also reserve a spot for your bike, though friends in SLO will be providing a few bikes.

See photos from our Leprechaun and Tweed Rides March 2011 night (the day ride tended toward leprechauns since we were in the St Patricks Day Parade). We did Tweed Rides in February 2010 but they were basically rained out so while some folks did ride in the rain, we didn’t get any photos.

Where are we going on tonight’s ArtRide? Here’s the route!

I’m sure we’ll take lots of fun photos and post them here so check back or subscribe!

CycloMAYnia Ventucky starts today with a First Friday 50s ArtRide Dance Party on 2 Wheels: The Greaser Bicycle Ball! ArtRides are Free * Light Your Bike * Bring Your Mug & Money * Ride at Your Own Risk ArtRides are Family Friendly: please use trailer bikes & burley trailers for children * We always meet at 5:30pm on the Ventura Beach Promenade  & Ride at 6pm TONIGHT’s ArtRide Route: * Meet 5:30, start at 6pm at the Artists Union for M … Read More

Bikergo Gal
Create a free website or blog at WordPress.com.