If you live in Ventura County or ride here, and you want to make a difference about bicycles on the street – this is the place to be!!

According to Rachel Morris VCCool Executive Director Topics include:

Learn more about VCCool here www.vccool.org or call Rachel at (805)648-1267. VCCool is a Ventura County global warming action group. Our mission is to engage all people of Ventura County in promoting a healthy climate.

Happy Easter to you and yours!

To celebrate, here are a few photos from last year’s April ArtRide, a “Bunny Hop” from gallery to gallery.

It  was a our third ArtRide  with about 20 people riding along Ventura Avenue and Main Street Ventura in LED lit blinking pink fuzzy Bunny Ears.

If dressing up and riding in a  group of fun people sounds like a good time to you, please join us! We ride every First Fridays and sometimes we have weekend rides too!

Our next ride is Sunday April 18. The theme is Steampunk and we leave the Artists Union Gallery on the Beach Promenade by 2pm. We’ll arrive at Bell Arts Factory 432 N. Ventura Avenue at 4pm for a fashion show and ArtWalk afterparty.

ArtRides are free: donations are appreciated!

Looking good, Big J, all Steampunked out for the First Friday April ArtRide! Love your wicker basket and bike trailer to tow your daughter, too!

We had about 50 Steampunk cyclists show up to ride around town yesterday, one of the best turnouts yet!

About half the riders went all out for Steampunk style, and the other half promise to be better outfitted for next month’s Disco Bicycle Ball with an after-party at WAV. 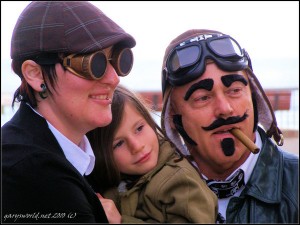 With our flamboyant costumes, we were the highlight of many people’s First Friday, especially as we cruised downtown Ventura on Main Street a few times. We enjoyed art at several locations; some of my favorite works were Imre Juhasz’s digitized photographs printed on canvas and at Bell Arts, and at Vita, Dianne Bennett’s paintings and Borbala Arvai’s fairy habitats.

Join us! April 18 we meet again at the Artists Union Gallery at 1:30pm to ride to ArtWalk galleries and studios. Or meet us at Bell Arts Factory at 4pm for a S 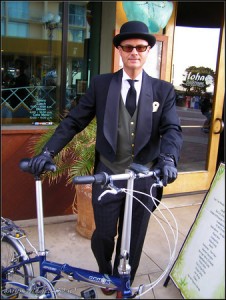 Need help getting you Steampunk on? Head over to Bell Arts Factory, 432 N. Ventura Avenue. For the next two weeks, from 3-5pm on Tuesdays and Thursdays, Bell Arts is offering FREE workshops. Bring possible outfits to wear on the bicycle ride or in the fashion show and the talented artists there will assist you in styling. Sessions in over-dying and screen printing Steampunk motifs are in the works. 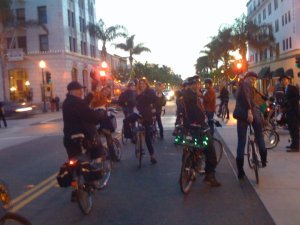 Thanks to Jenessa Nye and to Gary Stevens for taking pictures last night and for getting them to me so quickly. For more of Gary’s photos, Gary’s World. You’ll find more photos and more about the ride on Art Predator.

Thanks, also to Gary and Jenessa for permission to post their photos here.  Please don’t copy (steal) these images or others (or text either)–ask first.