A Few iPhone Photos from June’s ArtRide “Get Lei’d” 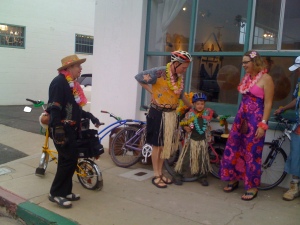 June’s First Friday ArtRide with the San Buenaventura ArtRiders Bicycle & Social Club had a smaller than usual turnout but we had fun anyway and finished up the evening with beers and food at Anacapa Brewery which gave anyone with a lei a generous discount. 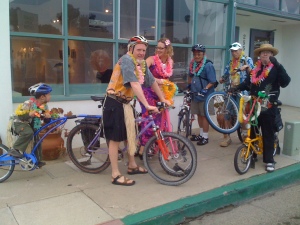 Do you see it there on the back of my pink bikergo, between me in pink and purple and the small boy in the grass skirt? 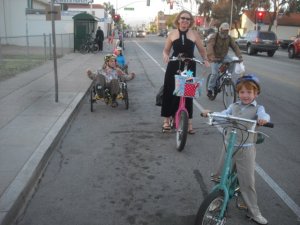 In anticipation of this month’s ArtRide,  Get Lei’d on June 4, I finally got around to putting up lots of photos from last month’s Boogie Nights & Disco Bicycle Ball.

I’m in blue velvet riding a hot pink bikergo and my son is on his seafoam green bikergo in his John Travolta vested suit!

I learned first hand on this ride WHY we require children 8 and under to ride along with a parent and not on their own bikes. My son kept up just fine on his bikergo. He LOVED being on his own bike and all the attention his bikergo received from everyone who wanted to check it out and squeeze the seat. The problem is that he was just too excited and distracted to focus properly on riding in a group on the street–and he kept crashing!

There’s a lot more photos over at Art Predator so go check them out! You can see  photos from May’s Boogie Nights ArtRide here and photos from the Disco Bicycle Ball here.

Hope to see you tomorrow because

The San Buenaventura ArtRiders Bicycle & Social Club
Wants You To

530pm Meet Cali St. & Ventura Beach
6pm Ride to Art Galleries & Studios
Follow Us to the Afterparty!
Special Thanks to Anacapa Brewery!
*Bring a mug & money
* We ride every First Friday
* Ride at your own risk*